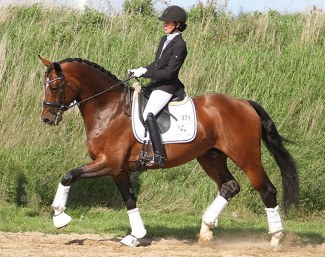 This lovely horse was licensed as a breeding stallion for the Norwegian Warmblood society in 2017 and has sired 5 offspring, amongst them, the 2021 licensed stallion B’Fair.

He won the qualifier for the 20217 Norway Breeders Cup. At the end of 2017 he moved to Denmark to be further developed by his current rider. In 2018 he won and was placed at his first shows in the 5-year classes with 73 %. In 2019 he was placed in 6-year old classes and qualified for national shows in Denmark.

2019 became a highlight year for him as he travelled to Norway to compete at the National Young Horse Championship for 6 year olds and won the first round and placed second overall. Competing against Danish warmbloods and other warmbloods, he was the best Norwegian horse in the field. His silver medal resulted in a ticket to the International Horse Show in Falsterbo, Sweden, and also a ticket to World Championship for Young horses in Ermelo, The Netherlands, where he achieved the best marks in years for a Norwegian warmblood.

Gelded in 2019 as his career has always been more focused on sport, Belamigo is the sweetest horse ever. You can trust him 120%. He loves a walk in the nature and he loves to jump. He has the most kind personality and is always positive. He has a lot of swing in his trot, a good clear walk easy to collect and a huge canter. He will for sure be your trusted friend.