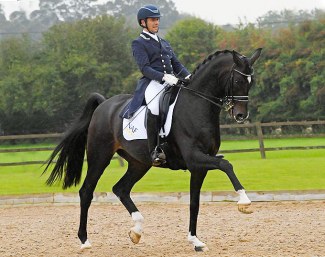 This stunning black gelding represented Great Britain at the 2017 World Young Horse Championships in Ermelo, The Netherlands, where he scored 81.000 points in the 6-year old division. He also won the international 6-year-old class at Bolesworth CDI in 2017.

This elegant horse has good rideability, a great temperament and three high quality basic gaits. He is a clear star for the future for an ambitious rider.

He would make an exceptional Young Riders' horse that can put any rider straight on the team and have the potential to take him/her into the Under 25 division.