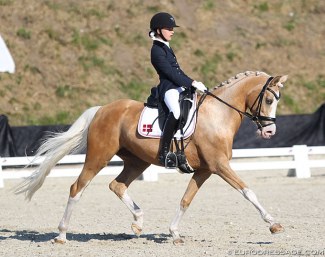 Goldfever Hella Bella (Goldie) is the perfect pony, for the rider who wishes to compete at the highest level. All her gaits are above average. She’s easily ridden, and she never gets spooked. She enjoys hacking as well as jumping, which she does once a week during training.

Goldie was selected for the Danish Pony squads in both 2018 and 2019. She has many placements both internationally as well as in Denmark. Goldie was – among others - part of the silver-winning team at the European Championships in 2018. Individually she was placed as number 9. The same year she was also part of the Danish team in Hagen, where she became best Danish pony in the team competition.

Goldie has also competed and been placed at Equitour, CDIP Wiener Neustadt and Aalborg Dressage Event. During 2020 Goldie has taken part in 2 competitions (as Covid closed most of the competitions in Denmark) – both of these she ranked in the top 3 above the 72 percent.

Goldie has been part of our family during the last approximately 3 years during which she has given us many amazing experiences. We hope she will be able to find a new loving family and give the same experiences to a new rider.

Goldie is sadly offered for sale as her rider has made the transition to horses.

Goldie is located in Odder, Denmark.