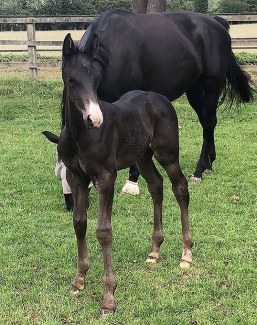 Total UK, or "Snip" as he is affectionally known at home, is a very correct elegant uphill model with 3 fantastic paces as well as his good looks.

Snip has been very easy going and willing to learn with all the things that we have done with him so far at such a young age, nothing seems to faze him and has a very bold/brave attitude to life. I feel that he will continue to do so in his coming years, as he is already showing that he has a very trainable relaxed attitude.

His sire Totilas producer of highly talented horses for sport. A living legend in his own right, brought dressage to great heights breaking the 90% barrier and also setting 3 world records in the process. Winning countless medals on teams and individual medals his competition record is outstanding. Some of his achievements include 3 gold medals at WEG, Team gold and silver followed by individual gold at the Europeans. He won the world cup final’s In Hertogenbosch NED. Setting another world record at the CHIO Aachen with judges awarding him 28 x 10’s !

His offspring Total hope OLD, Glock’s Toto Jr, Total US, Governor, Total Recall but to name a few are all extremely successful also setting records of their own along the way. Total Recall the most expensive foal of all times, sold for 200,000 euro and Total hope OLD won the Nurnberger Burgpokal Cup with almost 80 % and thus the second highest score ever achieved at this prestigious competition.

Roma (as she is known at home) also has a daughter by Sandro Hit competing for Germany and has already won at ‘S’ level dressage, as well as another Daughter by Jazz at Prix St George in America.

Her sire Rohdiamant needs no introduction, winning the Oldenburg Riding Horse championships in Rastede in 1993 and became a Federal champion at Mannheim and runner-up in the stallion performance test. He was champion dressage horse of his generation in Oldenburg and main premium stallion in 1994. As for as breeding, Romanov is just one of 50 licensed sons, including Rubin-Royal, Ron William, Rhodon, Rosenberg and Rosentanz.

With this fantastic combination of the best breeding lines on both his mother and fathers side, there is no reason to doubt this young colt has a fantastic future ahead of him in sport and as a potential sire.