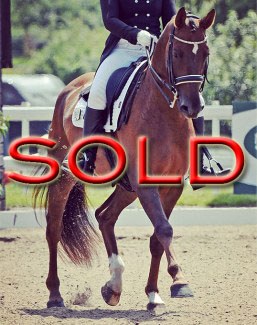 Sire - Dannebrog - Sired by the legendary dressage stallion, Don Schufro (Donnerhall x Pik Bube I) and out of the outstanding dam St.Pr. Byzantina (Brentano II x Arogno) this dark, liver chestnut stallion offers highly proven and successful bloodlines. Dannebrog completed his 300 Day Stallion Performance Test at Adelheidsdorf in 2010 with fantastic scores, finishing 3rd overall in Dressage with an impressive index of 135.74. His individual scores highlight his fantastic mind and overall high quality. This rigorous 300 Day testing highlighted his extraordinary character, his fantastic rideability and his three supple and elastic gaits. Dannebrog is also full brother to the amazing Diva Dannebrog, dam of licensing champion Zoom. Diva Dannebrog had one of the highest scores recorded in the mare performance test at Verden.

Dam - Laurixe. Sired by the influential Lauries Crusador, Laurixe stems from a Grand Prix and State Premium producing damline. She has one offspring at M* (Advanced Medium), one at S*, and Dragunov who is training the Grand Prix. Her dam St.Pr. Boney M produced the full sibling to Laurixe, Advanced horse Le Chavlier. She also produced Grand Prix horse Wittmund, who is now a schoolmaster to a young rider. St. Pr. Boney M is also the full sister to Grand Prix gelding Boney M.

Dragunov is a true example of his Grand Prix heritage, having picked up all the work easily from first try. His tempi changes are incredibly easy, the piaffe and passage a true highlight, and the pirouettes are developing into another highlight. He also knows the Spanish walk as his party trick.

He has a proven show record with scores of 70+% at Advanced Medium, and scores of high 60’s at Prix St Georges level. He has been lightly competed and worked due to owner's work commitments. However he is now proving that he is nearly ready to start his show career at Grand Prix which will definitely be where this horse shines. The piaffe-passage tour are very easy and very impressive and he will only get stronger and better in this. He has developed his confidence now in the one time changes, and they too are developing to be straight and strong.

For 8 years old, this horse is already confident in his Grand Prix work, and happy to have young teenagers on him to teach them the feel of the movements too. He would be amazing for a Young Rider and U25 Grand Prix rider.

He has a superb temperament and can be ridden by teenagers and adults, he is light and safe. He hunted at 4 and 5 years old. He has done demos in front of hundreds of people. He is very straight forward to handle.  He has been very forgiving and never wanes in his training.

In the same ownership for the past 6 years, he has been trained to Grand Prix by his owner.

Home is equally important for this special boy.

Located in the UK