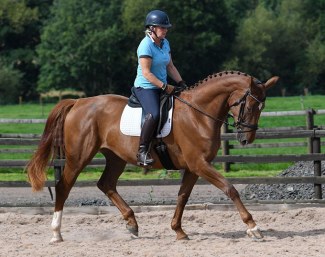 Sire U-Genius is a young ‘super stallion’ by Uthopia out of Weidyfleur II, Valegro’s only full breeding sister. The only stallion to have had both sire and uncle on the same gold medal winning Olympic team, U-Genius has enormous power, rhythm and balance, which combined with cleverness and trainability has made him a sought-after sire across the globe in his first breeding season.

Dam Wioletta has been internationally competed and trained to Grand Prix. Wioletta was a top Verden Auction Horse before being produced and sold to the UK, where she competed up to Grand Prix level.

RFW U-Got-The-Look has recently been professionally saddle broken and is showing immense talent in all paces. She has a superb temperament