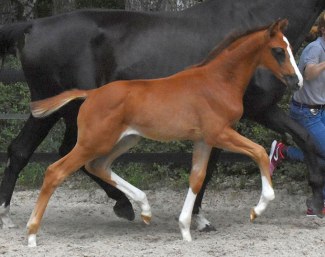 Super Oldenburg premium foal by De Royal out of a Weltmeyer dam.

This outstanding boy has very good movement, energy and modern conformation. Promising young horse for sport or for top class breeding. He is people friendly and learns quickly, he lives in a foal suitable mixed age group, and understands herd behaviour. Regularly wormed, and feet trimmed

De Royal is a first season sire, who was licensed by his breeder and not for auction at the licensing. His father is De Niro who needs no introduction, and his mother is a full sister to the 6 licenced stallions Glocks Romanov, Rubin Royal, Rubin Action OLD (Stella Charlotte Roth), Rumicello who placed up to Intermediare I as well as Rubino Vincento and Rockefeller

The mother State Premium Mare Wonne, won her class at her mareshow, and also Champion mare, she was also the mare with the highest score in her mare test with a 9 for trot Endscores - basic gaits: 8, rideability 8,25

- 2016 is in USA. As a 2 and 3 year old, won and placed in hand, also won group and show championships. Now under saddle and 60 days after he was first sat on, he won a Materiale class (80%), also the ridden championship against 4 and 5 year olds at a recognised USDF show. There have been no shows in 2020 due to Covid 19
- 2017 is in Germany and is considered good enough to breed a foal before she goes under saddle.
- 2018 is in Germany.
- 2019 is in Germany as prospective advanced dressage horse