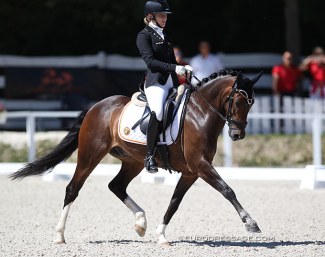 Over the past year, N-Constantino has achieved very consistent and ever improving results in the national and international arena. He competed at CDI's in Compiegne, Exloo, Leudelange, Deauville, Waregem, and Grote Brogel, winning the individual test in Deauville with 71.80%. At the 2020 Europeans this pony he consistently scored over seventy percent with 71.94 in the team test, 71.57% in the individual and 73.19% in the freestyle.

At national level he won the 2020 Cup of Belgium and earned bronze the 2019 Belgian Pony Championships last year.

N-Constantino is only 11 years old and has not yet reached the peak in his career. He is a very willing pony with lots of energy and potential for the highest performance. There is still much more in the tank as he is improving year after year.

Sadly offered for sale and looking for a new ambitious rider who wants to compete at the highest pony level in Europe!