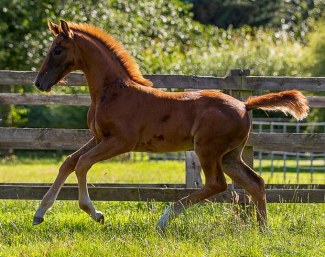 Armada Stud is proud to offer this delightful colt for sale. His pedigree boasts all of the above outstanding stallions plus Vivaldi, Krack C, Flemmingh, Jazz and Weltmeyer, combining the very best of Dutch and German breeding.

He shows a huge amount of presence and potential with a very bold outlook on life, intelligent and brave. He has a fabulous walk like his mother (she rarely scored less than 8.5 for her walk) and super use of his hind leg showing huge power and push from behind, coupled with great athleticism.

Perfect feet and strong legs with a good amount of bone. He will be a substantial, powerful horse with great strength in his body which is evident even at this young age. Optimally uphill with a beautifully set on neck, we are certain he will command your attention in the arena!

Vitalis needs no introduction really. A hugely popular stallion worldwide who shows a huge elastic trot and relaxed rythmical canter. He scored records marks of 10.0 for trot and 9.8 for canter at the U.S Championships and has now produced no less than 33 licensed sons!! His foals are much sought after and, no wonder, when he has produced Bundeschampionate and World Young Horse Champion Victoria’s Secret and in 2014 his offspring ranked first, third and sixth in the 6 year old division.

The dam line of this super colt features the elegant and impressive Don Frederico, sired by the legendary Donnerhall, who became Champion of the 1999 Hannoverian stallion licensing.    In 2009 he was awarded the Grande Prize of the Hannoverian Verband due to the resounding success of his offspring, most notably Don Johnson, ridden by Isabell Werth and Olympic Team Silver Medallist, Diva Royal,  ridden by Dorothy Schneider. Both horses have won many top CDI’s including the 2012 CHIO Aachen and 2012 Vienna Masters CDI4* GP.

Out of our State Premium mare, Armada Donna Bella (by Don Frederico x Donnerhall x Weltmeyer) who herself was a hugely consistent competition mare, notching up regional wins, Reserve National Champion titles and scored up to 82% in Young Horse Qualifiers. She was a very reliable horse to compete and the bigger the occasion, the better she performed!

With the legendary stallions Donnerhall and Weltmeyer featuring in his pedigree, this fantastic colt has everything set up for a super career in the dressage ring.