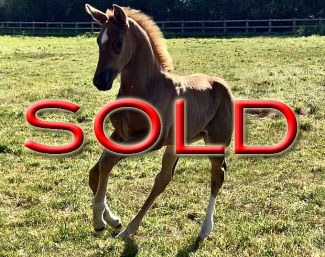 When you are the product of three kings of dressage (whether in breeding or in sport) -  Vitalis, Totilas and Donnerhall - you know you are special!

This filly is strong, expressive and beautiful and would be a dream foundation mare for a top flight breeding programme or a top class dressage prospect for the high levels.  She naturally takes weight on her hind legs and has the bone, strength and quickness for the advanced movements.  She is kind, confident and bold, and we absolutely love her.  She has four white socks and a star and her adult colour will be dark chestnut. Her pedigree also contains the golden cross of Donnerhall x Pik Bube.

Not only does her dam, Waverley High Society, contain a cluster of brilliant Grand Prix stallions, but her dam line is that of the foundation sire Lord Leatherdale (sire of among others, Dutch Olympic prospects Glamourdale and Everdale); and it has produced over 100 licensed German stallions.  The 1994 champion mare at the Oldenburg elite broodmare show Rastede, Hallo (Donnerhall x Pik Bube), is her dam’s full sister.  Vie en Rose is High Society’s second foal; her first was bought by one of Britain’s top dressage families.

Sire Vitalis (Vivaldi’s first licensed son) was KWPN Champion Foal 2007, Reserve Champion of the NRW licensing in 2009, winner of the dressage index of his stallion performance test in 2010 and a Young Horse championship winner in the USA, Holland and Germany; he then went on to win the Burg Cup Final in Frankfurt and the Stallion of the Year competition at Inter I level in Ermelo.  He has sired 33 licensed sons to date and also the Bundeschampion and Young Horse World Champion winner Victoria Secret.

Grandfather Totilas, setting three world records and winning three gold medals at WEG, took dressage to a supreme level of performance and put himself in a league of his own. (At the CHIO Aachen the judges awarded him a perfect ten 28 times!).

Now in retirement, totilas has established an incredible dynasty of licensed sons and high achieving competition horses. Great grandfather Donnerhall has the highest dressage breeding value of all stallions ever at 271; he has produced over 77 approved sons, 450 broodmares (84 State Premium), and 636 competition horses.  He trained to Grand Prix in two years, with special aptitude for piaffe, passage and trot extensions. He won over 65 FEI Grand Prix Dressage classes and earned over D.M. 640,000 in prize money (almost Euros 325,000)!