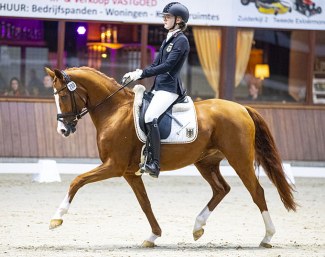 Tropensonne is a stunning 9-year old mare, who has been competing in FEI children classes since 2017. She is exquisitely bred, sired by pony stallion Totilas.

This young, talented children horse became Bundeschampion in the 3-year old pony mares and geldings class in 2015. She won and was placed in many Dressage Rider Tests and Dressage Tests in Germany between 2015 and 1019.

In June 2019 she placed 2x 4th and 1x 3rd with scores over 73% at the Future Champions CDIO in Hagen again and was therefore nominated as second horse for the European Championships in San Giovanni, Italy. In October she participated at the CDI-Ch in Exloo, where she won all three children classes.

Tropensonne has a lovely character, is always motivated to work and is affectionate towards humans. She behaves well and has a great routine at shows.

With a sensitive, young rider (no beginner) she will be able to pursue her career on the international scene. She would also make a highly competitive horse for a petite adult rider who wants to train her up the levels towards FEI.

Located in northern Germany near Hamburg