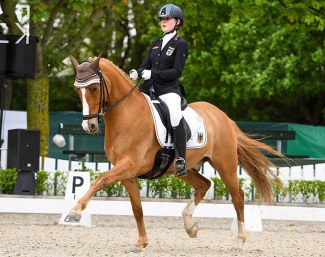 Delray is a beautiful German riding pony who has been confirmed and competing at FEI pony level since 2018 with a proven show record.

This young, talented FEI pony placed fifth at the 2018 Rhinelander Regional Championships, scoring 71% in the freestyle finals. He has been a member of the Rhinelander pony squad since 2019.

This year he won both FEI pony tests at the 2019 Preis der Besten qualifier at Schafhof in Kronberg, scoring 71% and 73%.

He was part of the German team that won team gold at the CDIO-P Nations' Cup in Mariakalnok, Hungary. There he placed fifth in the team test with 71%, third in the individual test with 72,7%, and fourth in the freestyle with 71,5%

In July 2019 he became the Rhinelander Regional Pony Champion, winning all competitions with scores above 70%, and gaining the title of Rhinelander Champion. He also competed at the 2019 Preis der Besten in Warendorf and 2019 German Pony Championships

Delray has been in the same family since January 2016.

He has a lovely, friendly character and is always motivated to work. This wonderful gelding has always been healthy.

A top FEI dressage pony for a rider who wants to in the winner's circle!