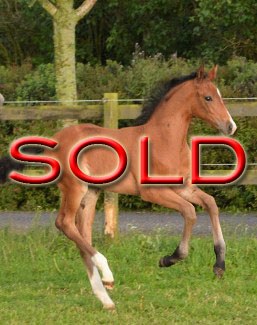 Very attractive colt that will be noticed in the dressage arena in the future. Lovely modern type with long legs and lots of presence.  He’s got three very good gaits with a great uphill tendency.

The dam was bought at the SWB Elite Foal Auction. As a three-year-old she received a diploma for her talent as a dressage horse. She’s got very nice gaits and rideability.  She’s a young mare and this is only her second foal.

The granddam is an Elite mare in SWB. One of her offspring, Ivory was placed 2nd in the Swedish Young Horse Championships as a 5 year old in Flyinge. He also won the class Champion of the winners. One of her other offspring has placings in Prix St George dressage.

Located in the South of Sweden (40 minutes from Malmö, 1 hour from Copenhagen, DK)