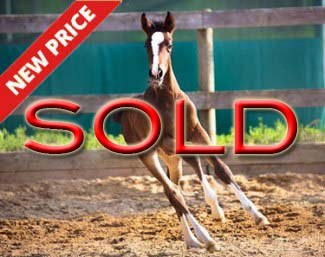 Zumaia Sk is a striking filly with a powerful frame.

Zumaia shows off the best combination of her pedigree, with expression, activity and strength. She is not only great prospect for sport but also for breeding.

She has a fantastic character, she is very sweet and affectionate with a lot of confidence. Easy to handle.

Zoom is a son of the renowned international Grand Prix stallion Zack, who himself was Danish stallion of the Year 2014 and sire of influential stallions such as Sezuan and Glock's Zonik. Zack was member of the Danish team at the 2018 World Equestrian Games and 2019 European Championships

Zumaia’s dam is by the 2009 Hauptpramium stallion Furst Romancier, who has over 30 licensed sons including For Romance.

Her grand dam Pattaya E was jumping bred and successful to M**  scoring 10 points in her licensing. Pattaya is by Peking, a son of Polytraum. Peking was a premium stallion, champion of the 2004 Westfalian Stallion licensing and competed successful at Grand Prix level in dressage in Germany.