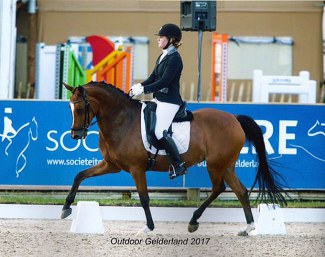 Wester Aikema's Celeste is a beautiful FEI Dressage pony mare, bred out of excellent bloodlines and with a proven show record.

She has consistently moved up the levels and has competed at many major Dutch pony dressage competitions, including Outdoor Gelderland at Z2 level. Her scores are minimally around 68%.

"Fiet", as she is nicknamed, has a wonderful character, excellent movements and no stable vices. This pony shines in the arena and is an ideal schoolmaster, even for smaller children.

This amazing pony has much in the tank and will make an excellent, competitive ride for an ambitious pony rider.

Sadly offered for sale as the rider has reached the age limit.

She has been fully vetted on 4 June 2019 with clean x-rays, including neck

Located in The Netherlands