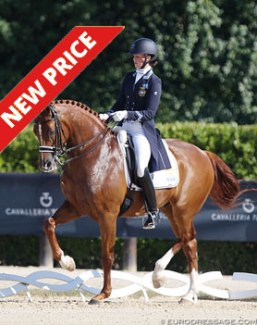 This is an outstanding 12 year old with extraordinary movement. Competed at international Under 25 Grand Prix level, Cerano Gold stands out with his uphill, modern model in his conformation and elastic gaits.

Trained by Vicky Thompson-Winfield, Cerano has three massive, active paces. His hind leg mechanic is second to none giving him an active correct walk, a well-balanced, forward and exhilarating trot and a beautiful uphill canter. He carries himself willingly and freely. Oldencraig Cerano-Gold shows exceptional talent for Piaffe and Passage and performs any lateral work with great ease in trot as well as canter.

His sire Serano Gold was the 2004 Vice State Champion of three-year old stallions in Rastede and was placed in the Final of the 2003 Bundeschampionat in Warendorf. He scored highly in his 30-day stallion test, receiving the highest mark for rideability of 9.7 with marks for his paces between 9 and 10.

Cerano Gold’s Grand sire Sandro Hit was the 1999 Bundeschampion for six-year old dressage horses and World Champion of young horses in Arnheim. Now that his offspring are winning in advanced level dressage, there is no doubt about the great performance potential of this line.

Cerano Gold is an absolute delight to work with and attracts attention like no other. He has got a charismatic character and very noble attitude. His PSG level work is established with a fabulous flying change and great lateral work and he is now comfortably schooling the Grand Prix movements.

Cerano Gold is bred for the top and portrays a lot of scope in his gaits. The judges love him rewarding him with over 70% and he takes one’s breath away with his dazzling expression in the arena.  He is a real top class prospect, destined for a successful future, he would make a top class horse for a junior-young rider and Under 25 rider.

He is good in a trailer and horsebox, good to shoe, clip, box, and jumps. He also hacks well alone or in company.

He competed Small Tour in 2018 and was placed each time out.  In 2019 he competed at U25 Grand Prix level at three internationals, including on the Swedish team at the 2019 European Under 25 Championships in San Giovanni (ITA).