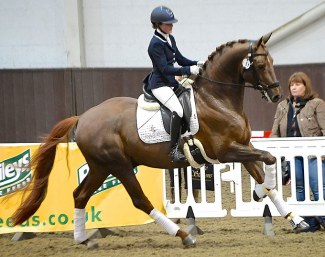 A fresh and very exciting breeding prospect, Integro is an elegant and charismatic young stallion with outstanding potential.

His exceptional breeding is already showing in his presence, conformation and natural movement. All 3 paces are showing every sign of progressing well: his walk is loose with a good overstep, his trot is balanced, powerful and elevated and his canter is wonderfully uphill with very good use of hindleg. His shoulders are loose allowing a very good front leg and knee action and his hindlegs are active and supple with very good hock flexibility. Integro wowed the crowds at his first public outing at The Competition Stallions Event, Addington, GB, in January.

Sire Dimaggio also needs little or no introduction. He was one of the most successful Dressage stallions of modern times and is renowned with an ability to produce top-class international dressage horses. Dimaggio is a proven producer of Grand Prix horses, has over 320 offspring registered in Germany alone, over 20 licensed sons and his highly coveted progeny have continued to achieve the highest prices at European elite auctions.