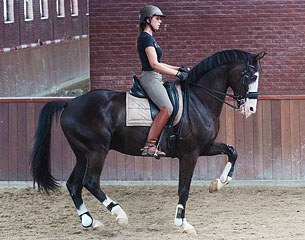 Japanese Olympic team rider Masanao Takahashi has received the ride on the 8-year old Dutch warmblood Eaton H as his 2020 Tokyo Olympic Grand Prix hopeful. A new sponsor of Masanao has acquired the horse for Masanao.

Eaton H is a Dutch warmblood gelding by Wynton out of Ziolita H (by San Remo). He is bred by Mr Hoeflaken and was owned, trained and competed by Esmee van Gijtenbeek.

The striking liver chestnut gelding with white blaze and stockings is officially named Eaton H with the FEI, but Van Gijtenbeek always referred to him as Enton H. On Dutch national results he is also listed as Enton H.

Esmee and her mom Lizbeth de Jager trained the horse up to Grand Prix level. They were 11th in the 2017 Dutch Indoor Small Tour Championships

Esmee and Eaton H recently did their first, national Under 25 competitions in the spring of 2017 and they won the consolation Grand Prix class at the 2017 Dutch Under 25 Championships. They never competed internationally.

Enton H was for sale and has now become the ride of Masanao Takahashi, who runs his own dressage yard in Tokyo and used to be sponsored by Kenichi Hayashi. In 2015 Hayashi acquired Renate Voglsang's Grand Prix horse Fabriano, which Masanao took to the 2016 Olympic Games in Rio.

Eaton H, however, has been acquired by Japanase company Unitechno, which sells semiconductor package materials.