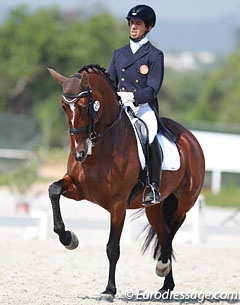 Gonçalo Carvalho Conchinhas and the Portuguese owned 9-year old Lusitano mare Batuta were the winners of the 2015 Portuguese Grand Prix Championships held in Ponte de Lima on 25 - 28 June 2015. The pair claimed victory in each of the three Grand Prix tests to triumph overall, with Filipe Canelas Pinto got silver and Daniel Pinto won bronze.

Carvalho and the 9-year old Batuta (by Quixote) achieved 71.200% in the Grand Prix, 72.980% in the Special and 77.780% in the Kur to Music. This is Carvalho's third national title. The previous one he captured in 2012 on Christina Jacoberger's Olympic horse Rubi AR.

“We were expecting to win and with the respect from all the competitors," said Carvalho. "We came to this show trying not to give too much pressure to Batuta, just to relax her during each test and in that I feel we succeeded!”

While the weather was very warm, even a little too warm the organisers did a great job to make the show enjoyable.

“The village and the competition venue are both very nice and it is a place we would like to compete more in Portugal," Carvalho stated.

Carvalho is experiencing a lot of pressure at the moment as his horse tested positive to controlled medication at the 2015 CDI Vidauban in March. On 2 July Carvalho accepted an administrative sanction from the FEI. He was diqualified from Vidauban and has to pay a fine, but he will not be suspended from competition. This weekend Goncalo is competing at the CDI Hartpury in England and aims for the 2015 European Championships.

"After that we will sit down and organise our next shows to quality for the Olympic Games," stated the rider, who is trained by Jan Bemelmans. 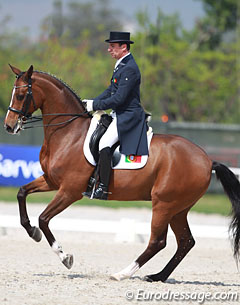 Runner up in the race for the title was Filipe Canelas Pinto and his loyal team horse Der Clou (by De Niro), a Hanoverian with a good head and good temperament. Canelas scores 67.680% in the Grand Prix, 71.200% in the Special and 74.340% in the Kur.

“In Ponte de Lima, I felt him in the best way, especially at Grand Prix Special and the Kur,” Filipe told Eurodressage. “Piaffe, extended trot, and the pirouettes are his strongest points.”

Hoping to be selected on the Portuguese team for the 2015 European Championships, Filipe also has his eye set on the Olympic Games.

“In Der Clou's daily routine  I always aim to improve his physical ability and iron out his little imperfections, I hope to work hard on this in order to qualify for the Olympics next year," he explained.

The Portuguese champion of 2013 and 2014, Maria Caetano, withdrew from the freestyle and finished eight in the ranking on her top horse Xiripiti.

"Xiripiti was tired from the trip from Mallorca that was only one and half week before," Caetano told Eurodressage. "So I decided to withdraw him from the freestyle to save him from more effort and don't risk a possible injury before the Europeans. t was extremely hot and humid weather in Ponte de Lima and I thought that Xiri doesn't deserved to be "pushed" in such conditions. He had been doing a great season on CDIs."