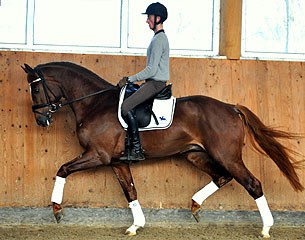 AC/DC (by Apache x Florestan) became the price highlight of the 2015 Hofauktion Borgmann in Ostbevern, Germany, on 6 June 2015.  The 3-year old licensed stallion sold for 160,000 euro to Mr Stritzke from Hamburg.

The auction at Norbert and Stephan Borgmann's yard celebrated its third edition so far and offered embryos up to 5-year old dressage horses for sale, including seven licensed stallions.

The second most expensive horse was the 5-year old Especially (by Estobar x Florencio) which sold to Strizke as well for 82,000 euro. The 4-year old stallion Dressage Noir (by Dancier) received a final bid of 62,000 euro.

There was a small collection of foals for sale and the top seller was a filly by Fashion Maker x Estobar, which achieved a knock down price of 7,500 euro.

Twenty-eight horses were offered for sale at the auction and the average price for the thirteen sold 3 to 5-year olds was 48,000 euro.