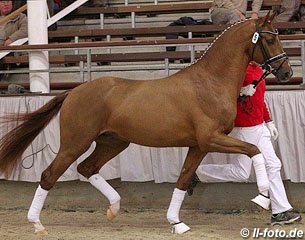 The chestnut Borsalino (by Boston x Fidermark) was named champion of the 2014 Westfalian Stallion Licensing in Munster-Handorf on Wednesday 26 November 2014. Twenty-three dressage bred stallion were licensed in a collection of 69. Nine dressage stallions were named premium.

The chestnut colt is bred by Johann and Katja Schmid and owned by the breeders in partnership with Mr. Schreder.  He is by the late Dutch bred Boston (by Jazz x Flemmingh) who is not KWPN approved but who briefly bred successfully in the Westfalian area before he passed away in February 2009. The dam is State premium mare Wildfee (by Fidermark I x Coriograf B x Landadel). The licensing champion sold at auction for 710,000 euro to Klosterhof Medingen. 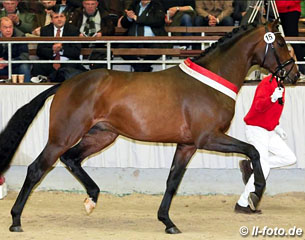 The reserve champion was Johannes Rüter's Villeneuve (by Vitalis x Dancier x Worldly x Akatschi). He is bred by Edeltraud Hähn. He sold at auction for 270,000 euro to Sissy Max-Theurer in Austria. 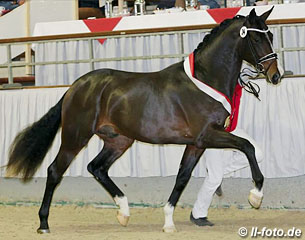 The Trakehner stallion Millennium (by Easy Game x ) did good business in Munster as well. After delivering the licensing champion for Trakehner (Sir Sansibar) and for Oldenburg (Millennium x Rubin Royal), the Trakehner sire now had all three selected colts in Munster licensed for the Westfalian studbook. One of them made it into the premium ring, Walter Droege's Millepoint (by Millennium x Furst Heinrich x Weltmeyer x Azur).