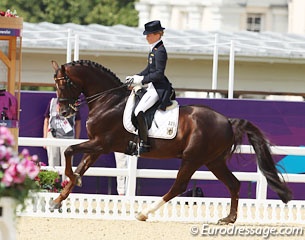 In July David Stickland's Global Dressage Analytics reported on Eurodressage their Predictions for the Dressage Olympics and how it arrived at them. Now it’s time to do a reckoning and see whether or not the results turned out as predicted

and to try to get some extra insight into the Olympics. Stickland had the chance to attend all the Dressage events with his family and says he had a spectacular time.  "The whole ambience was very special, from the guides in every railway station to the sport itself and the good times with friends in the local pubs after the event," Stickland wrote.

There were a couple of last minute team changes that slightly modified the July prediction, particularly for Spain with the unfortunate withdrawal of Beatriz Ferrer-Salat's Delgado. Our predictions were on average 1.1% high for each of the riders in the 7 teams that completed the first two tests. We put this down to a combination of factors, not least of which the very high level of competition and the high pressure on every rider not to make mistakes that cost a team medal; it is a different thing to go to the limit of your riding in a qualifying test and to compete in the real event for your nation. In the first table we show the July prediction corrected for the average 1.1% lower scores, together with the the actual scores and ranks for the 7 teams.

The two riders who upset our predictions were Adelinde Cornelissen and Carl Hester! We said back in July that they were the “dark horses”, some fantastic scores in their records, but recently more variation and in Carl’s case hardly any recent shows to measure with. Well they both came through! Carl picked up 4% compare to prediction and Adelinde 3%. There were some rides that of course did not come through as high as expected also, Laura Bechtolsheimer, Kristina Sprehe and Steffen Peters each came in about 2.5% lower than predicted. Steffen’s score was bad news for the USA; all along it was clear that their team score depended very much on Ravel as being the one team member who competes on even terms with the top European riders, but is was not to be and USA dropped one place in the Team rankings compared to predictions.

So how were the events won and lost? In the pie chart we show which figures were the decisive ones for the ranking in the Grand Prix. Basically the size of each pie-slice is proportional to the variation in scores for that figure type, the more the variation the more the score affects the ranking. As in 2008, the most important figure in the ranking for the Grand Prix were the changes, closely followed by the Pirouettes. But in the Special it was the Passage that was the most decisive figure. (Actually this patterns is quite common, in the whole field of riders the Changes are the ones that affect the ranking the most, but among the top riders it becomes the Passage, Piaffe and Pirouette that separate them out 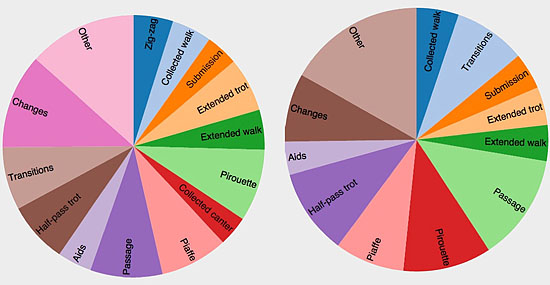 Significance in the ranking for various figure types in the Grand Prix (left), and in the Olympic GP Special (right)

We watched every test and had a super 4 days of Dressage, and when it came to the end of the Freestyle, as simple spectators on the 35th row, we weren’t sure who had won! But the judges were, they were very consistent. 6/7 Judges put Valegro narrowly ahead of Parzival. In the following graphic we show the differences in (coefficient corrected) scores for the Freestyle figures between Charlotte Dujardin and Adelinde Cornelissen. Bar’s above the zero axis are points in Charlotte’s favor, bars below the axis are points in Adelinde’s favor. After the event Stephen Clarke spoke about the differences in Harmony, but also the differences figure by figure were all in Charlotte’s favor except for Piaffe, Extended Walk and Halts. The winning margins for Charlotte were pretty convincing! 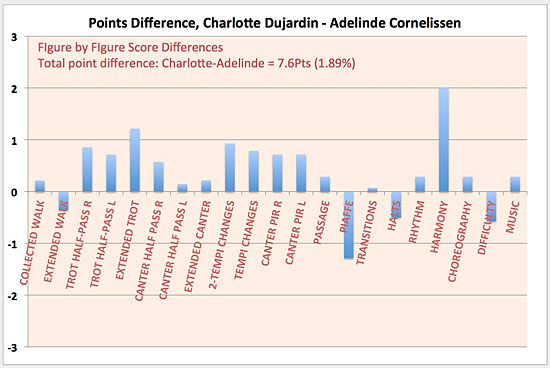 However, the Bronze medal decision could not have been closer. A single point in the sum of seven judges tipped the balance in the favor of Laura Bectolsheimer and Mistral Hojris, 2361.5 points, compared to Helen Langehanenberg and Damon Hill with 2360.5 points. As you see from the figure below it was an astonishingly close race. 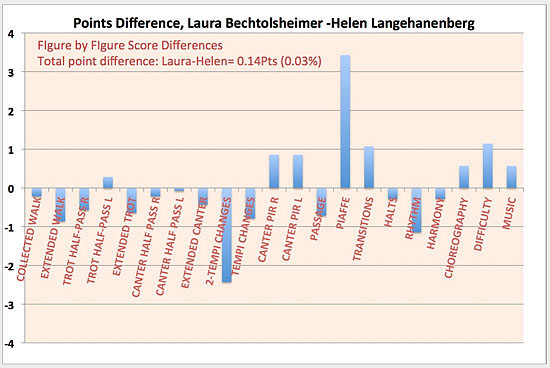 In an Olympics one has to pose the question about nationalistic judging. The basic picture is very clear, in this Olympic games no single judge changed the Team Medal result; the Team medals would have been the same with the 5 traditional judges; or with the 5 judges with the closest final scores; no judge changed their own Nations team score by more than 0.25% and in no case did this change a Team rank. That is a very positive statement about the integrity of the judging in London. In the next table we show the effect of each judge on the ranks of the top 5 competitors in each test.

Table of rank changes brought about by each judge for the top 5 riders in each test. What is shown is the rank that this rider would have had IF the judge in question was NOT taken into account. Only the red numbers represent any changes in rank (This judge actually changed the rank)in the brackets () is shown the actual change in rank this judge’s presence was responsible for.

In the Grand Prix and Special no judge changed the ranking of the top 4 couples! At the top of the Grand Prix Carl Hester and Steffen Peters polarized the judges the most, Wim Ernes ranked Uthopia third overall while Stephen Clarke, Maribel Alonso and Evi Eisenhardt put Ravel above Uthopia. In the Special the only changes were for Mistral Hojris, while as previously noted the Freestyle was so close for 3rd and 4th position that removing any of the judges at E, H or M would have switched the Bronze medal between GBR and GER. But in every Olympic event someone comes 4th and someone 3rd, even if it is by 0.01 seconds in a Marathon! That's sport.

GDA will be at the Global Dressage Forum where we hope to meet you, we can also be followed on facebook and twitter @gdanalytics, and of course on our website at http://globaldressageanalytics.com. Our system is now open for all International riders to get accounts and start to track their own performance and see how to improve it.