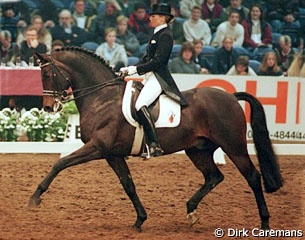 The following riders have been announced as the participants for the 2001/2002 World Cup Dressage Finals in 's Hertogenbosch, The Netherlands. The Western European League has its last qualifying competition March 8 to 11, 2002, at the CDI-W Paris.

Qualified combinations for the finals after Paris will be announced later. Already entered to start at Indoor Brabant are:

Coverage of the 2002 World Cup Finals