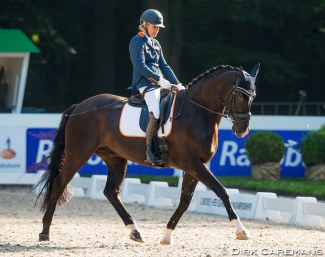 The 39-year old Den Dulk has been competing at international para level since 2013. Her first horse was the Westfalian bred Fifty Fifty (by Florestan x Sao Paulo) after which Wallace  (by Future x Rohdiamant) and the Australian warmblood Faust (by Fidertanz) followed

Wallace has been her most loyal companion with whom she won Kur bronze at the Europeans last summer.

On the road to Tokyo, Den Dulk now has a back-up horse for her 17-year old Wallace.

"Joey is very sweet and honest," Den Dulk told De Hoefslag. "He doesn't run away and is very focused on me. He's also very careful with me when I sit on him. He has a very good walk, which is important for my grade. His trot is also nice and I even cantered with him. He's very level headed, but still willing to work and he gives me a safe feeling.

Nicole and her horses are trained by Joyce Lenaerts at her yard, De Beukenvallei, in Leende, The Netherlands.

"Joyce rides Wally once in a while and now also Joey," Nicole explained. "Joey still needs to learn much, because he is now turning six. It's nice that Joyce teaches him  the movements first. She can try if he reacts to certain situations. Joyce can do that better than I. I'm looking forward to competing him.