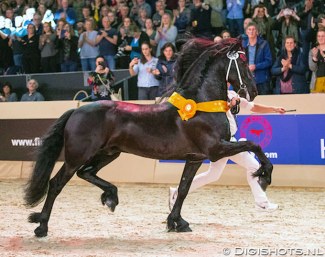 The powerful 8-year old Matthys 504 was named the champion of the 2020 Friesian Stallion Licensing in Leeuwarden, The Netherlands on 11 January 2020.

The Friesian studbook caters to a smaller market (approx 45,000 Friesians are registered world wide), yet it is impressive to see how the Leeuwarden indoor arena featured a sell out crowd for this event.

The 8-year old Matthys 504 (by Norbert 444 x Beart 411) is bred by Stan Derksen in Oosterhout, The Netherlands, and owned by Jasper Van Manen from Ede, The Netherlands. Breeder Stan works as a handler at Van Manen stables.

"He was the horse that constantly showed the most active hind leg as well as a spectacular front leg," said the announcer at the licensing about Matthys 504.

In the older stallion division, Jehannes 484 was named champion of the licensing. Fonger 478 became the reserve champion.