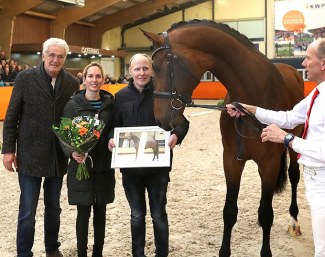 This edition of the autumn testing took place later than usual and atypically ended into the new year. The stallions had their final exam day on Saturday 18 January 2020 after 35 days of testing.

Eight dressage stallions out of 14 that began the testing completed the 35 days and scored sufficiently to be licensed for KWPN breeding.

Not the mega hyped licensing champion Le Formidable, but the bay Las Vegas became the top scorer with a total of 90 points.

"We are very happy with how the testing went as well as with the licensed stallions. Each of them showed good movements with uphill tendency and self carriage. Three of them have blood not easily found within the KWPN breed and in general they all behaved well in this impressive environment," said licensing committee chair Bert Rutten.

The second best scoring stallion was Lowlands (by Millennium x Donnerhall), bred by B. Schrapper and owned by Eugene Reesink. He earned 87.5 points.

Kaiman, by the recently deceased Dark Pleasure out of Gribaldi, bred by Naber and owned by Reesink, finished on 84 points.