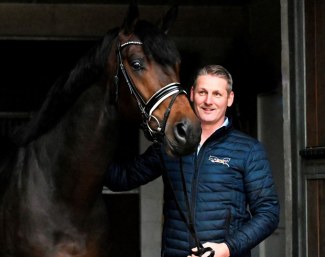 Andreas Helgstrand and Bjorn van Kessel of Stallion Station De Ijzeren Man in Weert, The Netherlands, have struck a collaboration with this station becoming the new Helgstrand Holland semen distributor for Holland and Belgium.

This involves that the "Helgstrand Holland" partnership with Reesink Horses has come to a close and will continue through De Ijzeren Man.

In the autumn of 2018 Helgstrand partnered with Deckstation Schockemöhle to expand their reach on the breeding market and the collaboration has been highly successful. The last stallion licensing of 2019 has now taken place and new young stallions have been bought, so the stallion collection for 2020 boasts much new promising talent.

After many years of co-operation with the Dutch Reesink Horses, which is also known as Helgstrand Holland, Helgstrand Dressage has in cooperation with Schockemöhle decided to achieve synergy between both companies by using a common distributor in The Netherlands. The new distributor is De IJzeren Man, which is located in Weert on the border between the Netherlands and Belgium.

"It has always been our goal to find common ground with Schockemöhle, and here I don’t only think of our vision to offer our customers some of the absolute best stallions. It’s also about having the same covering conditions, the same distributors, etc.," says Andreas Helgstrand, owner of Helgstrand Dressage.

He added, "we’ve had an amazing cooperation with Reesink Horses regarding the promotion of our stallions in The Netherlands, which we would like to thank them for."

Björn van Kessel, who owns De IJzeren Man, has many years of experience and a huge network, which Helgstrand/Schockemöhle look forward to benefiting from.

"The new cooperation will also make ordering semen more manageable for our breeders in the area, as well as reinforce our service in the Netherlands. At the same time, De IJzeren Man, not only covers the Netherlands but also Belgium, where we see a huge potential for our stallions," Andreas Helgstrand explained..

Both stallion owners are pleased with the new collaboration. Björn van Kessel is looking forward to the new cooperation.

"Of course we were interested in offering the Schockemöhle-Helgstrand stallion collection in the Netherlands and Belgium, because it gives us a unique possibility as a stallion station to offer our breeders the best stallions in the future, including exclusive bloodlines from all over Europe," said Van Kessel enthusiastically.

"Since  2000 we have been distributing semen from Paul Schockemöhle's stallions in both The Netherlands and Belgium and in the same way, we expect a long co-operation with Schockemöhle-Helgstrand," Björn added.

The new season will start off with a stallion show in The Netherlands on 17 April 2020 in Weert, where De IJzeren Man is located.