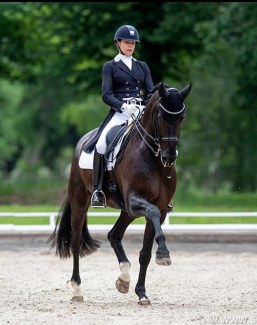 Nuxoll and her 7-year old KWPN bred Bonheur de la Vie (by Bordeaux) won the qualifier in Balve with 72,683% and thereby qualified for the Finals in Frankfurt on 19 - 22 December 2019.

Unfortunately the pair has been withdrawn.

The first reserve on the list is Lena Waldmann and the 7-year old Oldenburg stallion Morricone (by Millennium x Rubin Royal)  and they will be substituting for Nuxoll. Waldmann and Morricone placed second at the qualifier in Verden with 75.024%.

For Waldmann, who is a head rider at Gestut Bonhomme in Werder, this is an extraordinary feet as she will be taking three horses to Frankfurt next week. She has two horses qualifier for the Burgpokal (Cadeau Noir) and one horse for the Louisdor Cup (Developing GP Championship) with Fiderdance.

"I can travel with three horses to Frankfurt. I'm overwhelmed and happy," said Waldmann.