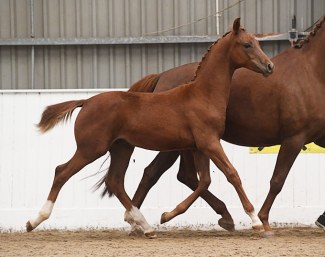 Fonzie is from a Rohdiamant mare with links to the great stallions of Rubenstein, Donnerhall and Pik Bube.

Fonzie’s sire Fidertanz dominated his 30-day test in Neustadt-Dosse, and then a year later took the Vice Champion title at the Bundeschampionat in Warendorf, with a score of 9.5 from the guest rider. In 2006 he was awarded the dressage Hauptprämie in Oldenburg in recognition of his outstanding first foal crop. In 2007, Fidertanz received a score of 8.8 in a qualifier for the Bundeschampion and thus fulfilled the performance requirements for licensing. He meanwhile won up to Prix St. Georges and competed international grand prix under Antonio Do Vale.

Fonzie has it all:

- Exceptional genetic makeup, with a pedigree containing many dressage champions on both dame and sire lines
- A magical cocktail for success
- Radiates class and presence
- Well balanced paces. does flying changes with ease
- Outstandingly beautiful with an amazing kind friendly personality
- Having competed at the British Warm blood Breeder Championships, Fonzie is already displaying a very confident and well-mannered attitude towards his work.