Quinoa Moves to The Netherlands 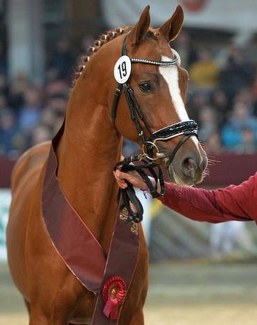 Quinoa, the champion of 2018 German Sport Horse Stallion Licensing last November, has moved from Neustadt/Dosse to The Netherlands.

The Brandenburg state stud bred and owned chestnut stallion is by Quaterback out of Poesie II (by Brentano II x Gotland).

As Neustadt/Dosse is already oversaturated with its home bred Quaterback and P-line blood, the stallion will start the new breeding year at station De Ijzeren Man in Weert, The Netherlands, as reported by Horses.nl.

Managed by Bjorn van Kessel, De Ijzeren Man used to be the Dutch distributor of the Schockemohle stallions, but this is now being handled by Helgstrand.

The 4-year old Quinoa is scheduled to the mandatory Stallion Sport Test in Munster-Handorf on 4 - 6 February 2019. So far he has not been shown in any riding horse classes in Germany as a 3-year old.