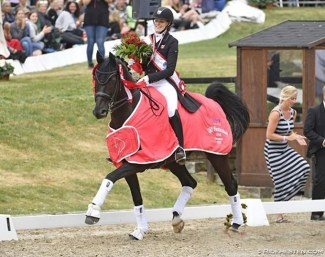 Fifteen Danish under 25 Grand Prix riders rallyed in Broholm for the big title match, and it was routinier Sille Engermann who took highest honour. Aboard her long-time partner Darius, a 15-year old German bred Donnerloh x Pik Solo offspring, she won the Intermediaire II with 68.105%, placed second in the Short Grand Prix (68.953%) and won the freestyle (74.125%). The 20-year old Engermann has not competed internationally in almost a year, with the 2017 European Under 25 Championships in Lamprechtshausen as her last international start, but at national level she continues to be a force to reckoned with renewing her title of 2017 this year.

The silver medal went to newcomer Soren Wind aboard the 10-year old Dutch warmblood bred Diego (by Valeron x May Sherif). The 24-year old, who works as a rider at Andreas Helgstrand's yard, began his quest to the silver medal spot on the podium by placing fourth in the Intermediaire II (67.316%), winning the Short Grand Prix (69.116%) and placing third in the Kur (71.225%). Nana Gajhede and the 16-year old Danish gelding Overgaard's Lawell (by Weltjunge x May Sherif) finished with bronze after scoring 67.947%, 67.860% and 69.450%. Gajhede has taken over the ride on Lawell from owner Julie Dankau who has put her competition career on the back burner and is focusing on her job as a school teacher.

In the Grand Prix Championship there was no avoiding Danish super star Cathrine Dufour and her 15-year old Danish gelding Atterupgaards Cassidy (by Caprimond x Donnerhall). The pair was unbeatable and led all three rounds with 80%+ scores from the all Danish panel of judges. In the Grand Prix they earned 80.480%, in the Special they got 80.255% and in the freestyle they finished their gold medal course with 86.925% for their Kur. With a total of 247.660 points they were a league of their own.

Daniel Bachmann Andersen and the 14-year old KWPN stallion Blue Hors Zack (by Rousseau x Jazz) ended up with the silver medal, even though Bachmann was scoring better on his shooting star Zepter (by Zack x Wolkentanz II) in the first two rounds. As Zepter is the young talent, Bachmann opted to ride the more mature Zack in the freestyle finals. Zack scored 72.340% in the Grand Prix (4th), 76.137% in the Special (3rd) and 82.900% in the Kur (2nd). They earned silver with 231.377 points.