Sarah Warne: "A New Life as a Mother" 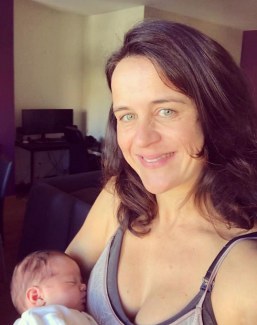 In December 2018 Portuguese based Australian Sarah Warne contributed her last story to Eurodressage as part of her popular Classical Training series, which took her on her journey relocating from Down Under to Portugal to learn dressage.

While Warne trained her Lusitano Batialo up to Grand Prix level, she also struggled with personal injuries which forced her to end her active riding career. Since then Warne got married and at the beginning of January 2020 gave birth to a daughter, Madalena.

Here is Warne's last column on her major life change from a dressage rider to a mother.

A New Life As a Mother

I never thought about being a mother. I admire women who grow up knowing that that is their path but for me it wasn’t something I thought a lot about. I don’t gush over babies and before 5 days ago I had never held a newborn baby, or any baby for that matter.

I have the most gorgeous nieces and nephews, truly brilliant independent and fun kids, but still I never thought I would be a good mother.
I spent my life worrying and taking care of other people, trying to take care of mum at 11 years of age even though she is the strongest and most independent woman I know and of course didn’t actually need taking care of. I was so horrible to myself for so long for something that wasn’t my fault.I worried that because of this lack of natural maternal sentiment that I shouldn’t be a mother, or wouldn’t be a good one.
But four years ago, like you read or see in movies but never believe, I fell in love with a man when I saw him. That comes with a lot of expectations, but somehow , even in my wildest imaginary and perfect version of this man and how he would be, he turned out to be even better!

Still I told him I never thought about having kids, and he said that he thought that part of his life had past and we were ok with that.
The week we moved in together my breasts started leaking. You can’t fight nature, and we both laughed but something very strong said to me that perhaps I shouldn’t overlook the possibility of kids.

A year later and the urge was now a force and I announced very clearly one day that I actually did want to have kids, and right now would be a good time. This man, a little taken back, knew that once I decide something it’s hard to convince me otherwise, and so we decided to try.
Pregnancy for me was the most amazing experience of my life, that was up until 5 days ago when I met our daughter Madalena.
I felt so strong and calm during pregnancy, and I am usually a person who can get effected by little things and take too much on board.
I have the most amazing support team from my Pilates instructor and perhaps best friend Ana Luís Martims , who is one of the most profound women I have ever met. And I also have my fisio Jorge Pereira who is truly gifted and just a truly great person right to his core.
I was worried after the broken hips when I was young and the sacrolite dysfunction and chronic pubic pain for years, that pregnancy would be very hard on me. A dr hinted that possibly after the first 12 weeks of pregnancy I’d need a brace and it would be hard to walk.
Turns out I felt better during pregnancy than I have in years, and the morning I gave birth I was in the gym training. Sitting on the exercise bike wondering if maybe I had very bad gas !!

We headed to the hospital when the gas turned out to be labour and I was able to achieve my dream of giving birth naturally.
I know that I was truly lucky, and that many women have awful birthing stories, and I am so grateful for all the help and support I received.
It was honestly the most liberating experience of my whole life, and after ten minutes in the birthing room and 6 pushes the best thing that has ever happened to me arrived in mine and my husbands lives. And all my worries about being a terrible mother were erased as I found it to be the most natural thing in the world for me. The nurses asked how many kids I have because they assumed I was not a first time mother. And my husband, when he looks at our beautiful daughter , well it’s the greatest thing I have ever seen, equaled only by the way he looks at me.

I know it won’t be easy. This is the beginning and there will be many challenges to come. I have a rather big tear and all the aches and pains, but for the first time in my life I am giving myself a break. I am proud of myself and my body. I don’t feel the need to put pressure on myself. I love everything about the whole process, and I feel like the pain of labor is needed otherwise it would feel like it didn’t make sense. It needs to be profound to mark it, to give it the importance it deserves. And compared to broken hips and pubic pain and a life time of horse riding injuries it’s a lot better than I expected!

All this to say that after 9 months of being fed horror stories from every direction I felt like pregnancy and childbirth was the most profound and now rewarding experience of my life, and that just because you aren’t the stereotypical mum type, doesn’t mean you won’t embrace your new identity, love being a mother more than you could imagine, and want to absorb and remember every second of it!!