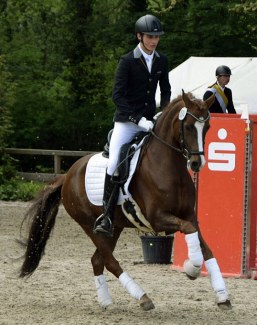 In the same ownership for the past six years, Napoleon and his young rider grew up and developed up the levels together in dressage.

Napoleon successfully participated in the 2014 and 2015 Bundeschampionate  - the German Young Pony Championships - in Warendorf. In 2016 and 2017 the pair qualified for the Vogely Cup and became district champions.

They successfully participated in the Regional Championships and have been numerous victories and achieved numerous placings in A, L and FEI tests, also against warmblood horses.

in 2019 his rider sadly outgrew his pony before they were ready to compete at FEI events.

Napoleon is fully confirmed in the FEI Dressage Pony level movements. This very well trained pony is now awaiting a new rider, who wants to win with him.

Looking for a new 5-star-home for Napoleon.