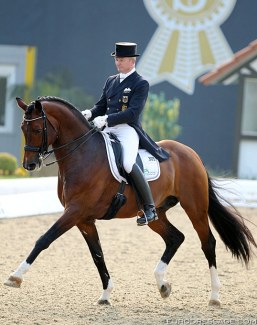 Florenciano is a 2004 KWPN stallion by Florencio out of Lundi T (by Havidoff x Lector). He is bred by H van den Brink and was owned by Ralph Uwe Westhoff.

A Life in Germany

Although Florenciano is Dutch bred, he is only licensed in Germany, first the Westfalian society, and then for the Oldenburg Verband. At the time he was owned by Dutch horse dealer Eugene Reesink. Florenciano did his 30-day performance test in Munster-Handorf in 2007 and scored 8.93 for dressage and 8.58 for show jumping, finishing on a total of 8.92 points.

The stallion was first competed by Ingrid Klimke as a 3-year old. Three years later, in 2010, Hermann Burger took over and brought him to Prix St Georges level.

Florenciano was not competed for three years between the autumn of 2011 and January 2014.

Come Back with Hubertus Schmidt

He made his show come back at Grand Prix level under Hubertus Schmidt at the 2014 CDN Munster Indoor. Schmidt rode the stallion at his international show debut in Dortmund that year. Schmidt took him to CDI's in Hagen, Perl, Aachen, Mannheim, Wiesbaden, Cappeln and Munich between 2014 and 2015.

At that time the horse was owned by Gut Neuenhof in partnership with Sandra and Axel Schürner of Equus Invest AG.

In the spring of 2016 Florenciano sold to investor Ralph Uwe Westhoff and the ride was allocated to Marc-Patrick Fritz.

Fritz rode the horse at several national shows between April and November 2016 at Grand Prix level. The rider-owner duo ended their collaboration within the year and German based Israeli Eyal Zlatin stepped in.

The stallion has now begun a new career under German young rider Tabea Schroer, who will turn 19 in August.

Schroer has already had a successful career as an international pony rider. She rode her first CDI in Babenhausen in 2013 on Fin C and until 2017 campaigned numerous highly renowned FEI dressage ponies for Germany: Voyager, Equestricons Day of Diva, Danilo and Voyager. She represented Germany on Danilo at the 2016 European Pony Championships in Vilhemsborg and won team gold and kur silver.

In 2019 she made the transition to junior rider's level on the 10-year old KWPN mare Filegra (by Zhivago x Tango), but her international show effort was limited to just one CDI in Saumur in May 2019, where they scored 71.059 and 74.450%. At national level she returned to the arena with Filegra in August at the local show in Mainz-Ebersheim. In October she took the mare to Ankum for more mileage.