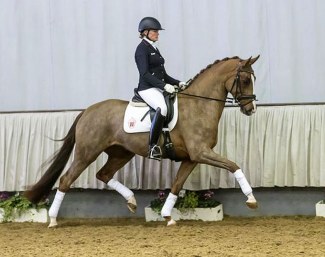 The 5-year old chestnut mare Enny became the best selling horse of the 2020 Westfalian Winter Auction in Munster-Handorf on 19 January 2020.

For the first time auctioneer Thomas Munch swung the hammer, replacing Bernd Richter who retired at the end of 2019.

The 4-year old Bella Donna (by Belissimo M x Briar), bred by Helmut Gäher, sold for the second highest price to a German, who paid 50,000 euro.

The dark bay Rambla Zamba (by Rock Forever x Florencio) will remain in Germany and sold for 43,000 euro.

The most expensive pony was the palomino Goldkurs (by Hesselteich's Golden Dream x Bavarottie), which sold for 27,000 euro.

Sixty-four horses in the collection were sold and they achieved an average price of 17,516 euro.