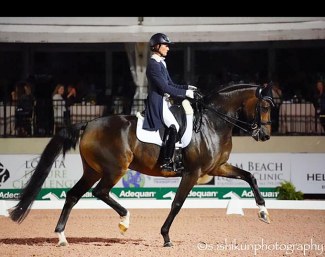 The rising 11-year old Oldenburg gelding Samhitas is by Sir Donnerhall I x Abanos x Rohdiamant. He is bred by Annette Engel and Andreas Wempe.

He was discovered by Canadians Gary and Jean van der Ploeg at the  2012 Oldenburg Autumn Elite Auction in Vechta, Germany, where he purchased the horse as the auction price highlight for 250,000 euro.

In 2015 the ride on Samhitas was allocated to Endel Ots from Wellington, Florida. He qualified for the 2015 World Young Horse Championships after winning the young horse final test at week ten of the Global Dressage Festival and the young horse classes at the CDI Katy in Texas. The pair went to Europe and did a warm up show at the Oldenburg Young horse championships in Rastede before traveling to the World Championships in Verden. There they finished 24th in the preliminary test and 11th in the consolation finals.

"Gary and Jeanie then decided they wanted to have me finish him up to the Grand Prix and sell him," Ots told Eurodressage. Samhitas did not compete in 2017 and 2018. "We made the decision to have him for sale and not show him, so that he would be more interesting for a international rider to buy him."

In 2019 Samhitas sold to Wellington based Australian Kelly Layne.

Born and raised in Germany, Kelly represented Australia at the 2006 World Equestrian Games in Aachen on Amoucher but the horse was so tense in the electric atmosphere and got eliminated from the Grand Prix. Layne continued her Grand prix career on Raja, Neverfelde Feuer, Von Primaire, Udon P.

In February 2019 Samhitas came to her barn and moved into her ownership. In December a share in the ownership went to Japanese Nora Maezawa.

Kelly and Samhitas made their CDI debut at the 2019 CDI Tryon in September. Last weekend they competed at the season opener of the 2020 Global Dressage Festival in Wellington.

"The plan is to get him some experience this season in the Grand Prix," Kelly told Eurodressage. "Endel did a wonderful job training the horse and I give him a lot of credit. Gary and Jeanie visit him and bring him big bags of carrots every time they are in Wellington and follow his progress keenly."