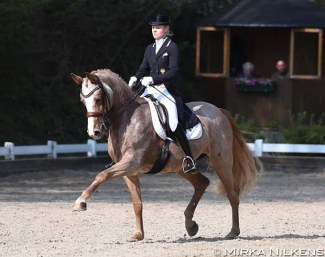 German junior rider Luca Sophie Collin has welcomed another horse into her barn. The latest acquisition is Loxley's Lovely.

Loxley's Lovely is a 10-year old Rhinelander mare by Lord Loxley out of Annabell (by Andantino x Mackensen x Romadour II). She was bred and owned by Achim Frenzen

The striking Loxley's Lovely is certainly an eye-catcher with her red roan coat. Under Achim's daughter Annabel Frenzen she was trained and competed up to Intermediaire II level.

Loxley's Lovely was only lightly competed in her sport career. She only began competing at a 6-year old in 2016.

She was first presented at L-level and in May 2017 moved up to S*-level. She only competed at local shows in Jüchen, Wipperfürth and Frechen in 2018 and did six smaller shows in 2019. Her last start was in November in Appelhulsen, where she was ridden in her second Intermediaire II test. The pair placed sixth.

In November 2018 Collin purchased Descolari at Isabell Werth's yard and in March 2019 she added the Dutch Young Riders team horse FS Las Vegas to her string.

The Essen based Luca Sophia Collin has previously competed her father Horst Collin's Doolittle (by Dancing Dynamite x Francisco) at L- and M-level in 2018 and Countess Amely von Buchholtz' Lola (by Sir Donnerhall x Weltmeyer) at E-level in 2017.

She showed FS Las Vegas at four shows in 2019, alternating the ride with Jochen Bender.