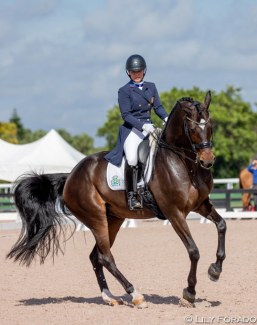 Pai and her trainer Adrienne Lyle have been shopping in Europe this summer in search of a successor for her now retired Under 25 ride Unlimited (by Jazz) and found Utopie d'Ouilly in France.

Utopie d'Ouilly is a 12-year old Selle Français bred mare by Quite Easy out of Isis d'Ouilly (by Narcos II).

This show jumping bred mare was bred by Alexandre and Francois Lebon in France and initially started as an eventing horse. Under French based British eventer Diane Esvan Utopie was competed at the Solihull and West Wilts trials in 2015.

In 2018 the mare resurfaced in France as an FEI Level dressage horse under Bertrand Lebarbier. Their last show together was at Grand Prix level at the national event at Haras de Jardy in April 2019.

From Junior to Under 25 Grand Prix

The 22-year old Pai has been splitting her time between Texas, Virginia and Florida. Her parents owned Floriano, Steffen Peters' team bronze medal winning ride at the 2006 World Equestrian Games in Aachen.

Natalie began her international dressage career as a junior rider in 2014 aboard Way Not (by Wie Weltmeyer x Gaston). In 2015 Classical Dressage Sales' auction horse Fritz San Tino (by Falkenstern II x Wanderbusch II) joined the ranks and became her young riders horse. She won team and individual gold with him at the 2015 North American Young Riders Championships in Lexington. In 2016 Great Gatsby (by French Kiss x Weltmeyer) took over the torch for her last year at Young Riders level.

In 2017 Natalie got the ride on P.J. Rizvi's Grand Prix horse Unlimited (by Jazz). Rizvi acquired the chestnut as a schoolmaster after Stephanie Peters and Madeleine Witte-Vrees had competed him in Europe. The redhead proved to be quite "Jazzy" but Pai found her stride on him and rode him in the Under 25 classes in Wellington, as well as at European CDi's in Rotterdam, Leudelange and Aachen through 2019. With Fritz San Tino she rode at small tour level until his retirement from sport at the end of 2018.

"I retired Unlimited in August," Pai told Eurodressage. "He is at my parents’ farm in Middleburg, Virginia. He is living in a pasture with my young rider horse, Fritz San Tino. They are both very happy and follow each other everywhere."

Pai made her show debut on Utopie d'Ouilly, who has been nick named Topie, at a regional show in Wellington in December 2019.

She competed her again the first weekend of January in a national show in Wellington and scored 68.462% in Friday's Under 25 Short Grand Prix and a winning 66.859% in Saturday's USEF qualifying Short Grand Prix.

"I plan on competing in the U25 with her," said Pai. "I’ve had two successful national shows with her so far. I am very excited for our first season, she is amazing!"