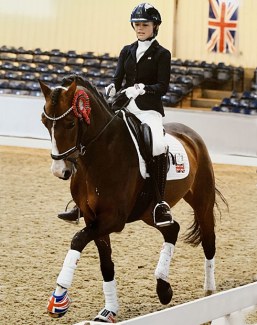 Rubinia is a stunning light bay FEI dressage pony with exceptional breeding and bloodlines, being a direct descendant of highly ranked stallions including Don Primero and Donnerhall.

Her sire Constantin has also produced European medal winning offspring. This combination of Welsh/German breeding is evident in her willingness to work and potential to excel further at PFEI level.

Bought in Germany two years ago for the Premier League and CDI circuit in the UK, this kind and talented pony has already been proved atPFEI level with placings in every Premier League class attended, including many podium positions.

This resulted in two CDI’s (Keysoe, Hickstead) in 2019, in which she also placed well in the top 10 in every class. At her last CDI Rubi scored 3 x 9’s among other high marks.

Rubi was selected for the British Pony Squads 2018/19.

She has been in the same family since 2017. She enjoys hacking and jumping also. Her sweet temperament makes her the perfect addition to a competitive home hoping to enjoy competing at the highest levels.