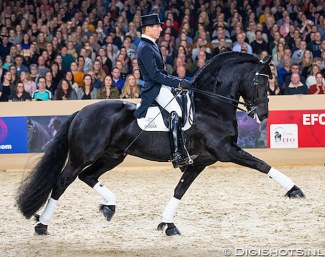 The international Grand Prix horse Elias 494 has been named the "Friesian Horse of the Year 2019".

Elias was honoured with this title at the 2019 Friesian Stallion Licensing in Leeuwarden, The Netherlands, on 9 - 11 January 2020.  The HOY title is allocated by public vote and expert panel.

The rising 11-year old black stallion is by Jorn 430 out of Maaike Brechtsje D (by Maiko 373).  He was bred at the Demrostables and originally named "Djorn van de Demro Stables". He is owned by Swedish duo Linda Annell and Kristofer Johansson.

Under Belgian Marc-Peter Spahn, Elias made his international Grand Prix debut in 2019 and competed at the CDI's in Hagen, Hamburg, Falsterbo and Emrleo, achieving scores that rose throughout the show season.

Their first year at Grand Prix culminated in winning the title of European Champion for Friesians Dressage Horses in October 2019.