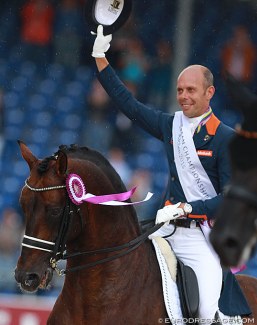 The public has voted and named Johnson as KWPN Horse of the Year 2019. He will be honoured as such at the 2020 KWPN Stallion Licensing on 31 January 2020.

With 3,831 votes, Johnson (by Jazz) got the most votes by far. Three dressage stallions out of a group of six were in the running for the title. His dressage rivals were Blue Hors Zack (by Rousseau) and Zaire E (by Son de Niro).

Last year Johnson was already celebrated in the 2019 KWPN Stallion Show for his retirement from sport, this year he'll return for the HOY title.

Owned by Gaston Glock and Team Nijhof, Johnson was all this time ridden by Hans Peter Minderhoud.