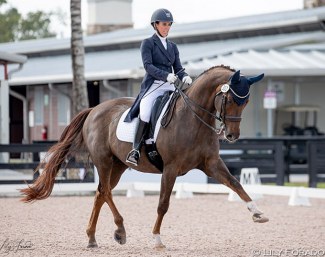 U.S. WEG team rider Kasey Perry is making work of bringing along a successor for her top ride, Grand Prix horse Gorklintgards Dublet, who turns 17 in this Olympic year of 2020.

At the opening national show of the 2020 show season in Wellington, Florida, Perry competed the 13-year old Hanoverian Mistico TM (by Donnerball x Weltmeyer) in the Prix St Georges in the Test of Choice class on Friday 3 January 2020.

Perry and Mistico scored the high score of the class, 76.324%. She also rode him in the Intermediaire I the next day.

"So proud of this boy," Perry took to Facebook. "Mistico and I went down centerline again this week in the national ring! First day we nailed our PSG with a 76.3!! Today had a very beautiful test with two bobbles and got a 70! I am so proud and honored to be rider."

Mistico TM was discovered by Juan Matute at the Hanoverian auction in Verden. The Wellington based Spaniard imported the liver chestnut to the U.S.A and his son Juan Matute Guimon showed the horse  first at junior level in Wellington in 2015.

Perry-Glass first competed Misitco TM at small tour level at a regional show in Beuningen, The Netherlands, in July 2017, but the horse has only been very lightly competed since.

Kasey Perry-Glas and her one Grand Prix horse Dublet (by Diamond Hit) have been a member of the U.S. Dressage team at the 2016 Olympic Games in Rio and the 2018 World Equestrian Games in Tryon. They also competed at the 2017 World Cup Finals and 2019 World Cup Finals.