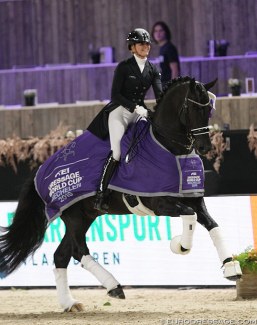 Dutch team rider Emmelie Scholtens led a pack of 18 riders in the Grand Prix at the 2019 CDI-W Mechelen in Belgium, the last international dressage competition of the year.

The annual Christmas Jumping Mechelen show is very well attended although the majority of the crowds comes to see the show jumping. This year however, the business and VIP seats were filled even on Grand Prix day and a more than decent audience had gathered to see the Prix St Georges and Grand Prix for the Saturday morning session.

More was at stake in the Mechelen Grand Prix than ever before as the show was the final event before the 31 December 2019 deadline for riders to achieved their Olympic MER team scores as well as individual points for the Olympic Riders' List which determines the individual slots in Tokyo.

Traveling to Flemmish city of Malines (spelled Mechelen in Dutch) as the favourite for the victory, Scholtens brought Ad Valk's 11-year old Dutch stallion Desperado (by Vivaldi x Havidoff). The combination was third last to go and was the only pair to crack the 75% barrier.

The started with a stretched halt at X, followed by wonderful, ground covering half passes. The rein back was hesitant and in the first passage Desperado was uneven behind with more right hindleg activity despite good power and suspension. The extended walk was well ridden and in the second passage the regularity was much better with nice transitions in and out of piaffe.

The zig zag had a few blips with a difficult start and less ground cover in the half passes to the right (the horse was counter bent already after the third stride), but Scholtens stayed very much in control of her horse and produced strong canter work. Desperado has big flying changes but today he stayed croup high in the two's. The pirouettes were good. In the final piaffe at X he back-stepped with the right hind but got a nice rhythm going. Overall the elasticity to the left needs to develop more in this horse. The young Grand Prix stallion has improved tremendously this year and also in Mechelen he showed more maturity and confidence in the work.

The judges panel, including Baarup, Leyman, Colliander, Riexinger and Van Daele, loved the ride and rewarded it with 76.478%. The individual scores ranged from 75.543%to 77.609%.

For young British team rider Charlotte Fry the month December has been a spectacular one. After already having a dream come true to ride on the British senior team at the 2019 European Championships in Rotterdam last August, Fry made her show debut at the Olympia Horse Show in London two weeks ago. For Brits riding at Olympia is a national achievement and Fry not only did that, but twice placed third on Everdale behind the Queen and King of British Dressage: Charlotte Dujardin and Carl Hester.

And the December treats continued in Mechelen as she rode Gert-Jan van Olst's 11-year old KWPN gelding Dark Legend (by Zucchero x Tango) to a second place in the Grand Prix on 73.780%.

The long legged black gelding is quite a tense horse, but Fry had him in the right shape today and was able to produce a very clean test. The tempi changes are dead straight, the zig zag was neat, the passage light footed, and in the extended walk there was good overtrack although the horse could have dropped more in the poll. Dark Legend has his issues with the piaffe though and crosses behind. Also in canter he easily loses the proper 3-beat rhythm, but Fry remains unphased in the saddle and highly focused to produce polished work.

Portuguese Maria Caetano, who is based in Krefeld, Germany, likes coming to Mechelen. Last year she achieved a personal best score on the 12-year old Lusitano stallion Coroado (by Rubi x Xaquiro) at this venue and also this year the grey stallion proved on point in the Nekkerhallen arena.

The piaffe-passage tour was sweat with Coroado showing more strength and engagement from behind and security in the rhythm. His big neck does not always work as an advantage but Caetano had the horse more supple and through in the contact. The extended walk had nice overtrack, the zig zag was very correctly ridden. The one tempi changes could have covered more ground and there was a slight loss of impulsion in the final piaffe at X. Caetano and Coroado were rewarded with 73.674% that slotted them third.

Portuguese Joao Miguel Torrao and Monte Velho's 10-year old Lusitano stallion Equador MVL (by Quo Vadis x Hostil) are competing on their first World Cup circuit in their career. Taken under the wings of Carl Hester, Torrao got the opportunity to compete at Olympia and now traveled to Belgium for the CDI-W Mechelen.

The chunky bay stallion was better in the contact here in Mechelen than in Olympia, with the horse more steady in the bridle and head position. Equador shines in the collected work. Although the hindlegs could move more under the body in the passage, the stallion has much airtime and expression in the piaffe-passage.

Torrao made his international debut at Grand Prix level only at the start of the year and Mechelen is his 10th CDI. The fairly inexperienced rider is really proving his worth with seemingly nerves of steel. His Grand Prix test was very nicely ridden with an overall very sympathetic silhouette. They scored 72.543% for fourth place.

French Morgan Barbançon has been going full steam ahead aboard the 13-year old Oldenburg stallion Sir Donnerhall II (by Sandro Hit x Donnerhall), riding Mechelen as her 10th CDI with the horse this year. It is also her fifth World Cup Qualifier in four months time.

A trio of French riders - Barbancon, Anne Sophie Serre and Alexandre Ayache - have been giving it their all their autumn show season to score Olympic Ranking List points and qualify France through a composite team for the 2020 Tokyo Olympics. When South African competitor Laurienne Dittmann failed to score 66% as first rider to go in the Grand Prix, South Africa lost its Tokio team place. One man's loss is another man's gain and that proved the case for France.

The extra mileage on Sir Donnerhall has proved its worth as the pair continues to grow and gel as a combination. While the trot extensions were still a bit hasty, the half passes were sweeping and the passage work very elegant with much rhythm. The piaffes remain small though. In the extended walk there was one hoof overtrack and the striding could be longer.  The canter work had many highlights: a big zig zag, nice pirouettes and the tempi changes are uphill, although there needs to be more straightness in the body in the ones. In the two's there is a difference to be noted between the left and right flying changes with the left ones being more uphill. The pair scored a personal best of 72.370% for fifth place.

France's hand of cards for Olympic qualification depended on a new ace that was dealt quite late in the season. Only in August Anne Sophie Serre started competing the 9-year old Lusitano mare Actuelle de Massa (by Pastor x Fuzilador Oco) at Grand Prix level and they have not scored below 70% in the six CDi's they have ridden at since.

In Mechelen Actuelle came close to her personal best mark of 71.630% which she set at the CDI Ornago in September. The pair scored 71.413% for an 8th place in the Grand Prix. While Actuelle's confirmation does not belie her Lusitano birth, the mare moves with striking elegance and self carriage. The trot extensions still appear hasty but the half passes were beautiful, the passage very light footed. The young mare is not secure in the transitions into piaffe and rolls into them.. Also in piaffe she gets very wide behind which shows her lack of balance, but the rhythm and potential are there for development. Unfortunately in walk she fails to achieve overtrack. However there are many high points in the canter work: small pirouettes, super straight tempi changes and a good zig zag.

France's final Olympic Ranking List score will depend on the marks achieved by the riders in the Freestyle. Then we'll know where France beat Austria and would have been secured of an Olympic team spot no matter had South Africa secured its MER or not. At the moment Austria took the first opened team slot (as Brazil failed to achieve MER) and France took South Africa's spot. The freestyle will decide if France will overtake Austria on the ORL or not.

Eurodressage was on the scene in Mechelen today. if you are interested in photos for social media, send us an email