Bonamour and San Ravallo Drop Out of 2019 Louisdor Cup Finals 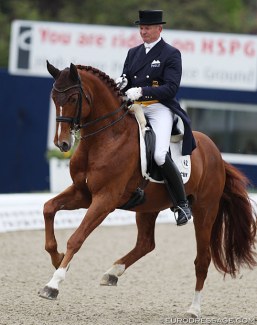 Bonamour and San Ravallo Out

Schmidt and Dong Seon Kim's 9-year old Westfalian stallion Bonamour (by Bonifatius x Rousseau) qualified for the Finals by placing second in the first qualifier at Horses & Dreams in Hagen with 72.605%. They went on to win the qualifier in Munich with a whopping 76.349%.

Both horses have been withdrawn. San Ravallo has been sold and his rider Nicole Wego is currently no longer riding as she is pregnant with her first child.

Rebroff and Dior Step In

This has created room for two new combinations that have scored the highest of all non-qualified participants to substitute.

The second substitute is David Leßnig with Heinrich Ramsbrock's 10-year old Westfalian gelding Dior (by Desperados).  They were seventh in the Hagen qualifier with 70.395% and 6th in Oldenburg with 68.767%

Competing in Frankfurt in the 2019 Louisdor Cup Finals are: