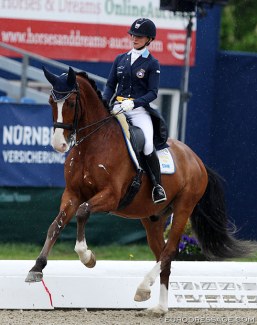 Isac is a 14-year old Swedish warmblood by Hip Hop out of Abigail (by Master). He is bred by  Per-Christer Bengtsson and was owned by Ekeslund Holding AB.

Minna trained Isac from young horse level to international Grand Prix. Although he was started by Magdalena Söderlund, Telde soon took over.

In 2012 the pair also made its international show debut at small tour level at the CDIO Rotterdam. They won the Intermediaire I with 71.289%. Isac disappeared from the scene the next four years. They resurfaced at Grand Prix level at the CDI Mannheim in May 2016.

"What a journey we had together and this year has been fantastic," said Telde about the sale of her horse. "It has been so much fun to finish at the top. I've shed a lot of theses these weeks. It feels so empty to enter the stable and Isac's big white muzzle is no longer sticking out, but I am incredibly happy that he is allowed to continue his journey with his new lovely rider."

Marie Sophie Ehlen began her international dressage career as a young rider in 2012 on Perignon T. In 2013 she added Don Santos and Lady Lissy to her string. In 2016 she moved to Under 25 Grand Prix level. Ehlen rode her last international in April 2018 at the CDI Mannheim.