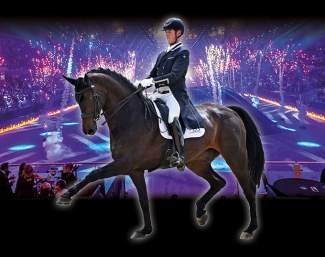 The very best of British Dressage stars, featuring the legend that is Carl Hester and his megastar ride, Nip Tuck are confirmed to appear at this year’s TheraPlate UK Liverpool International Horse Show.

Carl and the enigmatic bay gelding, Nip Tuck have been in great form in recent weeks, together taking the prestigious British Dressage National Champion title in September.

This was maestro, Carl’s tenth national champion title, and he was delighted to secure it with the much garlanded Nip Tuck. Said Carl: “It was nice to get my tenth National Champion title with him. He deserves it for what he’s given to British dressage – he’s represented Britain at European, World and Olympic level and always been so solid – he was due the win."

Upclose and Personal with Carl Hester at Liverpool

On their TheraPlate UK Liverpool International Horse Show debut, Carl and Barney, as his is known at home, will showcase a Grand Prix test in the atmospheric M&S Bank Arena.

Why not really make the most of your experience at the show by adding on ‘An Audience With’ upgrade to get close up and personal with Carl and guests during a special session at 4pm in the Arena Theatre on Saturday, December 28. The occasion will let fans enjoy, learn and interact with the equestrian and celebrity stars.

The Equitop GLME Freestyle Dressage to Music competition takes place during the evening performance with riders vying for the honours in the popular class.

Said TheraPlate UK Liverpool International Horse Show President, Nina Barbour: “We are delighted to be welcoming back dressage superstar Carl. He is an inspiration to the Sport at a global level and it is a privilege for him to join us at Liverpool. “The sport of dressage has grown beyond recognition and we are looking forward to watching some of the most talented and up and coming dressage horses in the country as they work towards Grand Prix.

“The M&S Bank Arena is a fantastic venue and there will certainly be plenty of atmosphere to give the crowd a real taste of top class dressage.”

Liz Barrett of Equitop added: “We are delighted to be supporting the Freestyle Dressage to Music class with Equitop GLME which provides the ingredients needed for optimal joint health, so important for horses competing at the highest level.” This year’s TheraPlate UK Liverpool International Horse Show will see a host of leading names in action from December 28 to 31, at The M&S Bank Arena on Liverpool’s iconic waterfront.

All tickets will include access to the Kids Zone with the shopping village open from 9am each day. Premium food and bar outlets will offer more variety around the arena, and an even better experience overlooking the warm up arena before the show, with cocktails and champagne flowing till late.

To upgrade to an ‘Audience With’ session with Carl and guests tickets start from £12.50 for adults and £7.50 per child, plus fees.

To reserve VIP Hospitality tickets on the purpose-built stage at the head of the arena please telephone 01829 307676 or email hospitality@liverpoolhorseshow.com