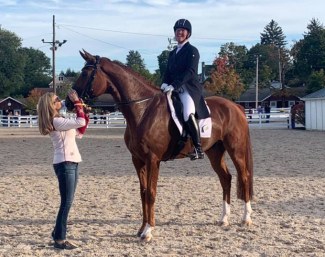 Canadian Jacqueline Brooks and her 12-year old Hanoverian gelding Westwood swept the Special tour at the 2019 CDI-W Devon on 26 - 29 September 2019 coming straight off back to back victories at the CDI-W Saugerties the week before.

To Dressage at Devon fans, Jacqueline “Jacquie” Brooks is a familiar face. After all, to the spectators’ delight, she returns frequently. “Devon is my favorite. Look at it,” she says with a sweeping arm gesture towards the Dixon Oval. For Brooks, it’s about the atmosphere. “The townspeople coming out to support it. Last night, people were coming out from town who had never seen a horse, and they were asking for autographs,” she says.

She describes Westwood as a calm, quiet, cuddly horse who finds all his work equally easy. “To have a horse that can do all the movements of the Grand Prix is rare,” she says. “Usually, they have one movement that’s more difficult for them.”

When comparing him to her D Niro, a.k.a. “Goose,” the Swedish warmblood gelding that she retired at the end of 2018, she believes they are unusually similar horses. "Both are big and strong, which I like, and they’re very strong in the contact," she said.

Westwood, however, is taller, a slightly more elegant mover and a little more emotionally fragile than D Niro. He loves being in the ring and doing his job. However, if Westwood tries too hard, he can become overly sensitive, so Brooks approaches his training slowly and steadily. She hopes to move from steady 68s to 70s, stepping up their scores in small, manageable increments.

She notes that part of the challenge in bringing a horse along in North America is that there are not many venues like the Devon Horse Showgrounds.

“You may have the opportunity five times a year to come into a venue like this, says Brooks.” She explained that at many other venues, the show and the stay at the grounds is much longer so the experience is very different.