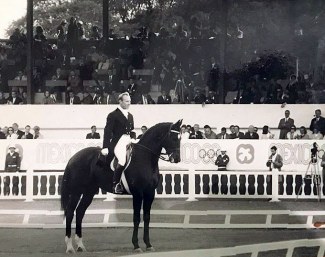 Born 28 April 1928 in in Novocherkassk, Ivan became Russia's most prolific and successful dressage rider in history.

He began his career as a jockey, then mastered the show jumping and eventing, receiving the title of master of sports, but found his true calling in dressage.

Kizimov competed at four successive Olympic Games on two horses, though it was one horse, Ikhor, that secured Kizimov's historic medal tally.

The Russian made his career on the Ukrainian warmblood Ikhor. Bred at the Alexandriisky Stud, Ikhor was born in 1958.

Their first major success was winning team bronze and placing 10th at the 1964 Olympic Games in Tokyo. Ikhor was only six years old at the time!

Four years later he won team silver and individual gold at the 1968 Olympic Games in Mexico City, beating Josef Neckermann on Mariano. In Mexico Neckermann took the lead after the Grand Prix with 40 points ahead of Kizimov. However in the ride off, Ikhor overtook Mariano, who was only 7th in that second class. Kizimov won gold with 1572 points and Neckermann silver with 1546 points.  German equestrian magazine St. Georg wrote in their commentary of the Mexico Games that, "The judges’ vote for Ikhor in the ride-off became a question of principles. Ikhor pushes more with the hindquarters than carries, him being favoured in piaffe, passage, and transitions aren’t real as he doesn’t take weight and the croup remains high.”

Kizimov and Ikhor went on to the 1972 Olympic Games in Munich where they won team gold and placed fourth individually.

Ikhor's competition career ended in 1975 and Rebus took over. Kizimov and Rebus became fourth with the team and 16th individually at the 1976 Olympic Games in Montreal.

He was the Russian Grand Prix champion seven times.

Kizimov was honoured as Master of sports of the USSR. After Montreal he became Russia's national team trainer. In 2003, the St. Petersburg Specialized Children and Youth Sports School of Olympic reserve was named after Kizimov.