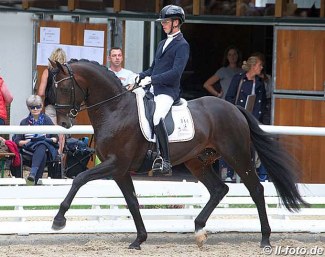 Zum Gluck OLD and Rock 'n Roll Boy became the group winners of the opening class - the 6-year old Dressage Horse preliminary test - of the 2019 Bundeschampionate in Warendorf, Germany, on Wednesday 4 September 2019. However it was Zum Glück that posted the high score of the day.

The Bundeschampionate are the annual German Young Horse Championships for ponies and horses in dressage, show jumping, eventing and driving. This massive event, hosted at the DOKR-German Equestrian Federation headquarters in Warendorf, are the highlight on the calendar for German equestrianism.

The winner of group one and high scorer of the day was the Dutch Robin van Lierop on Jacques and Saskia Lemmens' Oldenburg licensed stallion Zum Gluck (by Zonik x Florestan). Bred by Ullrich Kasselmann and sold as a price highlight at the PSI Auction, Zum Gluck was third in the preliminary test and ninth in the finals at the 2019 World Young Horse Championships in Ermelo a month ago. In Germany he led the division with sovereignty, scoring a total of 8.70 points after earning 8.5 for walk, 9.5 for trot, 9 for canter, 7.5 for submission and 9 for general impression.

The second highest scoring horse in the class was the winner of group two, Portuguese Nuno Palma e Santos aboard Barbara Welding's Westfalian stallion Rock 'n Roll Boy (by Rock Forever x Sir Donnerhall). The pair posted a total of 8.5 after earning 8.5 for walk and trot, 9 for canter, 8 for submission and 8.5 for general impression.

The top 10 highest scoring horses in the preliminary test move on to the Finals. The other 34 combinations can try again in the consolation final, which is held on Thursday 5 September 2019.

It was an off day for 2017 Bundeschampion Finest Selection (by Follow Me x Lauries Crusador xx). Therese Nilshagen had to retire the black licensed stallion from the preliminary test as the stallion refused to go.