Germany Gets Dressage Gold Again on Roller-Coaster Day in Rotterdam 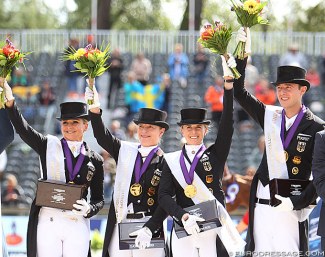 Germany claimed the team title for a staggering 24th time at the European Dressage Championships 2019 in Rotterdam, The Netherlands today where the hosts scooped silver and Sweden snatched the bronze.

The battle for medal placings was intense, and so too was the contest for the three available qualifying spots at the Tokyo 2020 Olympic Games which eventually went to Denmark, Ireland and Portugal.

On an extraordinary afternoon of high drama, German superstar Isabell Werth posted the biggest score of the competition with 85.652 from Bella Rose to secure the title and collect her 22nd European Championship medal and the 11th European team gold of her illustrious career. The stage looked set for Great Britain to bag the silver, but elimination for the penultimate partnership of Charlotte Dujardin and Mt St John Freestyle under the blood rule dropped her team to fourth, so it was the Dutch and Swedes who filled the lower steps of the podium.

The winning German side consisted of all four gold medallists from last year’s FEI World Equestrian Games™ in Tryon (USA), the only difference being the replacement of Dorothee Schneider’s ride, Sammy Davis Jr, with Showtime who posted yesterday’s biggest score. Jessica von Bredow-Werndl and TSF Dalera BB opened the German account yesterday morning, and when Sonke Rothenberger added 79.084 this morning, and then Werth and her 15-year-old mare put 85.652 on the board, the defending champions were never going to be overtaken.

It was another masterclass from the legend that is Werth, the most medalled athlete in the history of equestrian sport who said that today’s win was extra special because she achieved it with her beloved Bella Rose. “She was really brilliant, I’m happy and proud, both of us enjoyed the competition”, she said.

Werth, Schneider and Rothenberger were also all on Germany’s triumphant 2017 European side along with Helen Langehanenberg, but despite having another European gold medal around his neck, Rothenberger wasn’t entirely satisfied with his own performance.

"We came here with a really strong team knowing all horses scored already over 80%, so we expected quite a bit, but as you will see today it’s always a different story when you have to put it on the day in the ring. I was quite nervous for my own test…I couldn’t ride the perfectly precise round that we had in Aachen, but I’m looking forward to the following days and it was super fun to have such amazing colleagues who put down such amazing rounds," said Sonke Rothenberger (Team Germany).

Lying second as the day began, it seemed the British would cruise into silver medal spot when Carl Hester and Hawtins Delicato posted 78.323 with Dujardin still to come. But as the riders were preparing for the prizegiving the news of her elimination filtered through and Sweden moved up to bronze and the Dutch into silver medal spot.

Anne Meulendijks (Avanti) was the Dutch pathfinder yesterday with a score of 71.801 and Hans Peter Minderhoud (Dream) followed with a mark of 75.295. Today Emmelie Scholtens posted 76.087 with Desperado and when Edward Gal followed that with 78.758 from Zonik then the hosts were always going to take a podium placing.

Gal joked however that his stallion was a little distracted in the warm-up ring this afternoon. “There were all the mares I think that were in the competition in the same warm-up as me, so he was really wild - in the end they went away and I had five minutes when I could ride normal and then it was quite ok. But then in the ring I felt the concentration was a bit down….but luckily everything went well and the points were also nice so that’s why we are here now!” he explained.

Minderhoud described this afternoon as “really crazy because we were counting all the time for the scores”, and pointed out that this result means a lot to the host nation. “It was four years ago we had a medal, and I can tell you it’s not so nice to travel to Tryon (USA, for the FEI World Equestrian Games 2018) and to travel to Rio (BRA, 2016 Olympic Games) and not have a medal in your suitcase when you come back!” So today felt pretty good.

Sweden’s Patrik Kittel was also delighted to find himself and his team that included Therese Nilshagen and Antonia and Juliette Ramel, on the podium. “Today was quite something, like Hans Peter said it was like a roller-coaster. At first I was almost biting the sand - I thought it was going to be another Tryon again, 0.2 away from the medal, but in the end it worked out and we’ve had amazing sport and seen amazing horses!”

The individual standings in the Grand Prix showed Werth, Schneider and Rothenberger with the top three scores followed by Gal in fourth, Denmark’s Daniel Bachmann Andersen in fifth and Britain’s Hester just ahead of Kittel in sixth place. The top-30 individuals go through to Thursday’s Grand Prix Special in which Werth and Rothenberger will be defending the gold and silver they won in Gothenburg (SWE) two years ago.